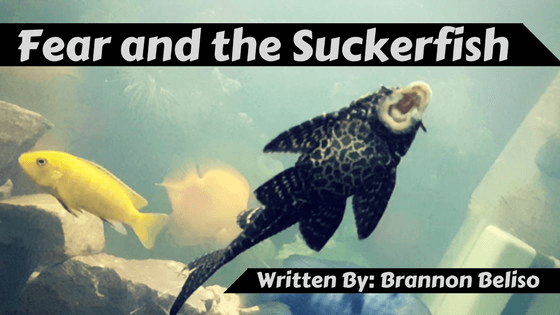 I need to be totally transparent. I’ve been avoiding you because you scare me. Facing you could equal potential failure and I would have to be accountable for that. The only action you inspire in me is procrastination. Lying in the dark with my face against the floor, you leave me paralyzed and numb. I have a voice and it deserves to be heard but at this moment you leave me mute.

Your name is Fear and up until now, you have owned me. Sad attempts have been made to address you through the written word and each time I stall, crash and burn. Distractions I’ve had plenty and excuses flow out of my pockets so I don’t have to deal with you.

Do you remember when we first met? I was a helpless five-year-old boy who suffered under the tyranny of dysfunctional parents who fought almost nightly. I would hide in the closest, which was under the stairs in my room, not knowing when my father would turn his anger from my mother to me, and enter my room to continue his assault. Standing in the dark, I came to know you well Fear. I begged you to leave but seldom did you offer a reprieve. At those moments, when my dad reigned down upon me, you and I came to a much deeper understanding.

You Fear became my purpose. From the stuttering to my obsession with abandonment, you were always there to fill me with anxiety. It was like I was chasing myself and had nowhere to hide because ultimately I couldn’t hide from myself.

I was terrified every time I won a karate tournament or got straight A’s on a report card. Even in victory, you consumed me and I grew to hate you as much as I did myself for allowing you to hold court over me.

You Fear defeated me for many years. Like a bad dream, all I wanted to do was to wake up from you. Nothing I did could make up for what I had allowed you to take. And take you did. You stole my dreams, goals, and relationships. Even when others saw me as successful, performing in front of thousands of people with a hit album and number one song, I never felt so empty and alone.

Then one year I found myself kneeling in a “Hail Mary Pass” of prayer. I made my requests to God, Jesus, Buddha and anyone else that I thought was listening and could save me. “I am alive in here” I cried but only silence filled my ears. I swore that I could hear a faint expression of faith deep down inside. I knew I was in there somewhere buried under layer upon layer of conditioned fear.

Pray, I did 365, 24/7. I had enough of living in terror and surrendered completely to a higher power. I would spend the next three years in a self-imposed solitude to learn what my purpose was in life. It has been a lifelong journey that continues to this day.

During this time, I learned about the story of the suckerfish. Not sure where I found it or if someone had told it to me but it left such impacts that I share it with everyone who is trying to overcome a fear.

The tale was about this one fish that lived in a school of other suckerfish in the river. Their whole existence was to suck on the rocks at the bottom because they believed that if they let go, the current could crash them against the rocks and possibly kill them. They knew with certainty that the current would drag them away from the rest of the school never to be seen again.

Well, this one suckerfish thought this totally sucked. Because of their fear of the unknown of what could happen if they stop sucking on the rock, they sucked even harder. All day and all night, suck suck suck. The suckerfish knew with a very deep sense of defeat why they had been named so.

Then one day the suckerfish got up the courage to let go. He understood that courage meant acknowledging that he was afraid, but not allowing it to stop him. As soon as the suckerfish did so, he was overwhelmed with panic and fought against the current. It was too strong and thrashed him against the rocks. In that second, he realized that if he were going to be truly brave, he would have to surrender completely. He stopped fighting the river by becoming very still and the most amazing thing happened. The water lifts him up above the danger of the rocks and with very little effort, he found himself floating down the river. The suckerfish had no idea where he was heading but he was no longer simply surviving just to suck on a rock.

With that said, you and I Fear to have a new understanding. I know you better than most and you no longer suffocate my every breath. I embrace you like a best friend with unconditional love. Big Brannon now protects that child you once took advantage of. I respect you and what you are capable of. Acceptance has become my practice when it comes to you.

You are now my inspiration. I soar above your failed attempts to pull me back down to your darkness. I am no longer weak to your will and have broken the ties that have bound me.

The writing of this book is my testament that I am not your prisoner today. I am finishing this body of work and promise you many more to come. And when you rear your ugly head again, I will use the tool of the written word to put you down. You Fear will not hinder my purpose in life to serve others and live my best life!