I submitted my first feature article idea to MASUCCESS magazine back in 2008. I had received an email reply from the editor John Corcoran to set up atime to speak on the phone. I remember our first conversation very well. Johnshared that my submission format was all wrong, but he liked my story idea. He gave me a lesson in the proper formatting and told me to rewrite it.
I diligently went about making the corrections and resubmitted it. This time John gave me the green light to write what would be the first of eight features I would pen under his tutelage.

John Corcoran was my writing mentor. I recall after finishing my first feature, he had read through it, and pretty much took it apart. Like a stern father, he pointed out everything that was wrong, and demanded my rewrites immediately as if the next issue of the magazine was coming out tomorrow. I later understood that what John was teaching me was to be able to produce under pressure and deadlines.

John methods resonated with me on a very innate level. His disciplinary approach was much like my first twenty years of martial arts training under my father, who had been in the army in the Korean war. I fell in line like a good soldier. I would go to war for John, article after article, until he believed my work was worthy of the magazine and I had won his approval.

This would be our professional relationship for the next seven years. Each article I wrote, John would school me on a path to becoming a better writer. He never pulled punches but was always respectful with a lesson behind everything for me to learn. I wrote my last feature with John entitled, “3 Steps to Success” in 2015. As usual, we would have several phone conversations as I made revisions and rewrites based upon John’s guidance until it met his standard of excellence.

I relished the last phone conversation John and I had before he approved my eighth article for publication. Even as I am writing this, the words he shared with me continue to motivate, inspire, and stay with me.

John had said, “Brannon, you can now call yourself a writer. You came to me as a white belt but now you are a black belt author. I want you to go out and write a book.” So, for the next two years, I would use everything John had taught me into writing my first book.

Our next conversation would be at the 2017 Martial Arts Supershow. I was there to promote my new book, “Live, Learn, Grow, Lessons of a Reluctant Tiger.” I was so excited to show John my credit to him as my writing mentor in the book. I caught up to him in an aisle on the tradeshow floor, which was not always an easy task because John had a step as if he was always going somewhere very important. I greeted him with pride as I held out the book. I shared my acknowledgment to him as my writing mentor. John opened the book, thumbed to the page of credits, and promptly pointed out that his name was misspelled. Before I could respond with an apology for the oversight, he was off down the aisle.

I watched him disappear and for a minute I was at a complete loss. I had failed my mentor with what was an error made by the proofreader who changed his last name thinking it had been spelled incorrectly. At that moment, I was back at being a white belt because I realized I had missed oneof the most fundamental lessons John had taught me. He was huge on accountability, and it was my name that was down there as the author, so it was my responsibility to do the final read through and no one else.

We didn’t speak much after that, other than a hello and small conversation at the next two Supershows. I corrected John’s name in the next printing, butI never shared that with him. He never asked either because he knew like a good student, I would make the correction, like I had done so many times before. I valued his creative input greatly and showed it in my humility to serve the reader with the best content I could create.

That was our relationship. John Corcoran was my writing mentor and I was his student. I will miss his colorful way of dressing and his bigger than life persona. But most of all, I will miss you John for every revision and rewrite you demanded of me. You taught me the craft of writing excellence. Like a disciplined martial artist who is committed to mastering his craft, I will honor you John sir with every word I write. 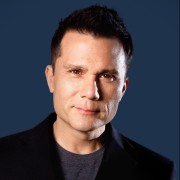